This research-based talk presents the shocking reality of misrepresentation in best-selling British magazines.

There is a powerful relationship between gender and social inequality. Unequivocally, magazines play an important role in perpetuating stereotypes that fail to represent society. This misrepresentation impacts on females’ self-perception and helps to maintain socioeconomic disparities.

In Brazil, for example, the majority of the population is non-white, but magazines frequently display more white and blond females, reinforcing a colonised Eurocentric idealisation of beauty. The same ethnic disparity happens in the UK: there are more flamingos on the cover pages than black women. In addition, the glossy publications reinforce exclusively Eurocentric aesthetics and misogynistic behaviour, portraying conservative roles connected to motherhood and heteronormative marriages.

When the cover girls represent any sort of diversity, they are automatically forced to act as ambassadors of a cause: overweight women must talk about health; non-white models must defy racism. The misrepresentation affects minorities in the same way it discriminates diverse body formats (size, shape, gender, sexual orientation, disabilities, etc) and, in general, only skinny white cisgender-able females are representatives of success and/or beauty.

Universities, magazines, and everyone in the media industry has the responsibility to join this debate and work to change the scenario. This event is a promotion of the Media Discourse Centre at De Montfort University Leicester in partnership with the University of Derby, sponsored by the Association of Journalism Education and the British Academy – Newton Fund.

Dr Ivana Ebel is a senior lecturer in Journalism at the University of Derby working with undergraduate, masters, and PhD students. She has broad international experience and holds a PhD in Communication and Media Sciences (Leipzig University – Germany); a Masters in Digital Media (Bremen University – Germany); a Bachelor in Communication Sciences – Journalism (Univali, Itajaí – Brazil), and a Post-Graduate Certificate in Higher Education (PGCertHe – University of Derby – UK). Ivana Ebel started lecturing in Brazil back in 2005. Since then, she has worked and lived in different countries, mixing academic activities with industry engagements. Her research is concentrated on media convergence, digital storytelling, visual rhetoric, mobile media consumption and fake news. She is multilingual and has more than two decades of industry experience in print media, web content, broadcasting, public relations, both in private and governmental positions, especially working as an international journalist.

Dr Gabrielle Bittelbrun is a media researcher and journalist, currently working for the Federation of Industries of Santa Catarina State, in southern Brazil. She is an experienced lecturer with a PhD in Literature (Federal University of Santa Catarina, Florianópolis, Brazil), and spent a semester researching in partnership with the University of Minho, in Portugal. She also has a Masters in Journalism (Federal University of Santa Catarina, Florianópolis, Brazil); and a Bachelor in Communication Sciences – Journalism (University of the State of São Paulo – Unesp, Bauru, Brazil). She has been working in academic research since 2007, funded by well-known Brazilian agencies such as Fapesp and Capes. In addition, her research – partially represented in this presentation – received a mobility grant from the British Academy through the Newton Fund. Her work is focused on feminism, gender, race, and women’s magazines. Gabrielle Bittelbrun is the author of the recently published book Colours and contours: gender and race in Brazilian women’s magazines. She is a member of the research group Literatual at the Federal University of Santa Catarina, working mostly with topics related to feminist and post-colonial contemporary narratives. 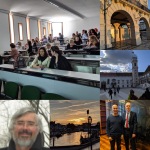